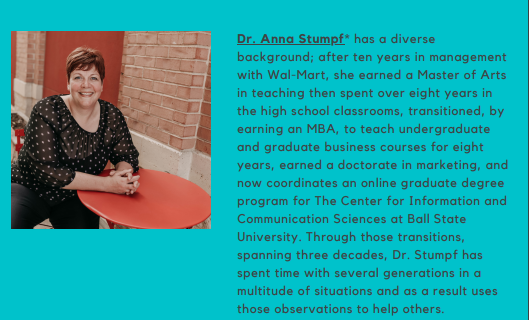 This interactive talk will walk students through the “why” of LinkedIn and discuss its role in building a personal brand, a job- seeking profile, and a professional networking mindset. There will be a few mechanics involved. But so much of those mechanics are either observed by being on the platform or checking YouTube. Dr. Anna Stumpf will cover the why and the differences in traditional social media platforms.

Following Dr. Stumpf, Mr. Chad Wallace will discuss how to prepare for an upcoming USF career fair. His presentation includes “do’s and don’ts” for a career fair and how to maximize your chances of earning a job or internship!

Dr. Anna Stumpf* has a diverse background; after ten years in management with Wal-Mart, she earned a Master of Arts in teaching then spent over eight years in the high school classrooms, transitioned, by earning an MBA, to teach undergraduate and graduate business courses for eight years, earned a doctorate in marketing, and now coordinates an online graduate degree program for The Center for Information and Communication Sciences at Ball State University. Through those transitions, spanning three decades, Dr. Stumpf has spent time with several generations in a multitude of situations and as a result uses those observations to help others.

You can learn more about Dr. Stumpf via her website, Golden Ticket Professor

Consultant at Career Services at the

University of South Florida (USF). He is a two-time USF alumnus, and he is

originally from Trinidad and Tobago.